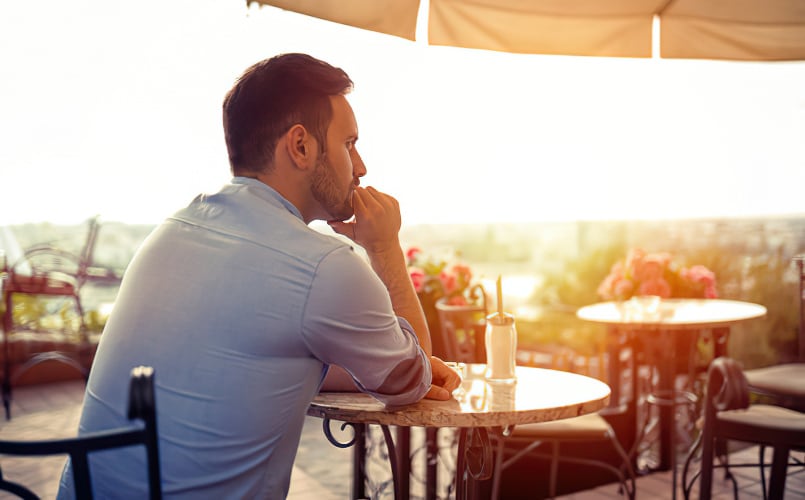 26 Mar Difficulties of Being a Single Man in LA

Posted at 15:25h in Dating Advice by Murphy International

Difficulties of Being a Single Man in LA

Reasons why NOT being single

Because of movies, professional athletes and rock stars, we have this idea that single men in LA equals being a player. We have the false idea that a life of a single man is somewhat glamorous and wild, but it is only true about 1% of the times. In most cases, the single men in LA are just not as happy. We all have dreams. Sure, the idea of being single and flirt with many different woman might certainly be very appealing…when you are 16 years old! At some point in your life, you will be looking for something more. You will be looking for that girl that you ACTUALLY WANT TO SEE AGAIN the morning after. You are going to be tired of all the walks of shame, of all the mismatches and the embarrassing “morning after moments”.

Most of all, you are going to be tired and ashamed when you will finally start noticing that ALL YOUR FRIENDS are quickly moving on, sharing their lives with their partners. Perhaps, some of them might even have kids already! They used to be just like you, but now you are the goofy one, the one that is still “wild and free” , as they like to jokingly put it in an effort not to make you feel humiliated. Well they miserably fail, because you and them all know the truth: there is nothing wild and free here!

If the shame being left out by your friends and social circle was not enough…bam! Your parents come into the picture. And your relatives too. Every single time there’s a family reunion, the older ones will be begging for nephews.

“Come here, son…and tell us. When can we finally get to become great-grandparents?” Your mother will perhaps be even worse. “I am the only one in the family who’s still not a Granma at my age!” Close your eyes, take a deep breath. Do you want to avoid all of this, and possibly much more? Well…stop mumbling and moping around, go out there and get yourself a woman!

By the LA matchmakers at Murphy International

Los Angeles is by far one of the most exciting, most lively and biggest metropolitan areas on the entire planet. You might think that it would be really easy to find the one, the girl to carry along forever in such a big city…but little did you know, you are probably approaching your mid 30s without a single clue!

Contrary to popular belief, finding single women in Los Angeles worthy of your time is actually harder than ever before, especially in a big city such as L.A.

Why is that? – Because we managed to shut ourselves in. Technology is such an ironic thing, because on one side of the spectrum, it allowed us to finally bridge the gaps in between the oceans, with amazing communication resources. On the other hand, we are more and more locked within our own social / internet habits, and it is becoming increasingly hard to look outside of your own bubble.

As a consequence, millions of single women and men all around the world (yes, believe it or not, single people also exist outside of Los Angeles!) are alone, struggling to find “the one”. Just like you are right now.

When all else fail, there is always online dating. Right?

NO, ABSOLUTELY WRONG! Most of the LA singles tell us that online dating is the worst possible way for you to waste your precious time (and in most cases, even your hard earned money). The plain truth is that in the majority of the situations, online dating is simply useless because most of the profiles out there are deceiving. It’s really hard to actually get a sense of who a person really is just by looking at a skimp, lousy profile on some dating service on the world wide web. Besides, there is absolutely nothing worse than a half-blind date, where she shows up and she is absolutely NOTHING like she looked on the internet.

If you want to get more scientific about it, statistics and numbers are really clear: according to recent social studies; only about 5% of the people who meet through online dating sites end up with a successful, happy and long lasting relationship. I don’t know about your math skills, but in my book, this means that 95% of the people who tried online dating services or similar things…wasted their precious time and money.
Instead of chasing fluff and smoke coming out of a computer screen, that unfortunate 95% could have been out there by now, looking for the proper one in a much better way.

Maybe you did not know this, but in a city as big and crowded as Los Angeles, online dating is definitely not your only option to finally meet a potentially right partner. In fact, there are many “offline” Los Angeles dating services and LA matchmakers who operate right there, in the real world.

This means that you finally get to deal with real, authentic people…face to face!

A real Los Angeles matchmaking experience is way more successful than the online dating, and it has been so for a very long time now.
When you meet somebody in the real life through an offline elite dating site, chances to find the right candidate increase greatly. Why is that? – Simply because you know that you both are looking for exactly the same thing.

A companion, a loved one to share your life with, for better or for worse. Perhaps, a profile on an online dating website or a web-based matchmaker platform might be misleading…but a smile, a look in her eyes…those things are priceless and they always speak the truth.
Some people go as far as stating that Los Angeles – The city of Angels, can actually be the toughest city in the whole world to be a single man.

If you think about it, it is kind of ironic: LA is always depicted as a very sunny place, not only because of the weather, but also because of the general friendliness of all the people leaving there. Undeniably, this city is also home to a great deal of beautiful single women. In spite of there being “plenty of fish in the sea”, it does not mean that a man’s love life can become better than any other place.

It might sound silly, but there are many reasons why it isn’t very easy to be a single man in LA. First of all, there is a very, very unbiased sex ration. What does that mean?

A sex ratio is basically the ration between men and women living in any given city. For example, if you live in a village where there are 200 men and 2 women, that means that the sex ratio of that village will be 1:100; meaning that there is only 1 woman per every 100 men. Tough times for the guys!

Los Angeles certainly does not showcase such an extremely desperate and discouraging sex ration, although according to the latest statistics from the US official Census in 2006, there are 89.000 more single men than there are single women in the city of Los Angeles, more than any other place in the United States of America (and hell, perhaps in the whole of North America!)

No wonder you are having a tough time find the love of your life with this numbers. The above information is also another great reason why you should not be ashamed to consider a dating service or a matchmaker (the practice is still considered a taboo for many people). If you are looking for a woman to spend the rest of your life with; to enjoy a lasting and rewarding relationship…you need to give it a try for one very simple motive:

If you are searching within an environment where even a woman is searching for somebody, you are actually going to have a much bigger chance to get good results. If you think about it, it actually does make perfect sense. Whenever you meet a woman through a Los Angeles matchmaking service, you know that you both have something in common from the very start, without even talking to each other in advance: you are both looking for somebody to fall in love with; you are both looking for lasting affection. There are so many great Los Angeles dating services that can help you find the best single women in Los Angeles, but as mentioned before within this very article, it is much better to try to avoid the world wide web and choose a web based dating service or Los Angeles matchmaker.

Just have a look on the internet to find out that there are many different chances: there are plenty of companies that are based in Los Angeles that cater to your needs. The only thing you need to do is to actually make sure you find a matchmaker with a mindset that feels compatible to what you’re looking for, and first and foremost, to your own personality. Another great thing that you can do is to actually ask for advice. There many LA singles in your situation who might be willing to share their own experiences with you. In fact, chances are that they are already doing it. – Just head over to any dating forum or online community with a base in Los Angeles. This way, you will be able to finally break through the thick curtain, so to speak, and unfold the many mysteries of dating in the hectic “city of angels” directly from those who have tried it first-hand.

Ultimately, finding the right person for you is but a matter of motivation. If you truly want it, you can set out to accomplish really anything you like. If you’ve ever contemplated joining an elite dating service, call the Los Angeles matchmaking team at Murphy International. They will open up your social circle and introduce you to beautiful professional single women that you’d never have met on your own.